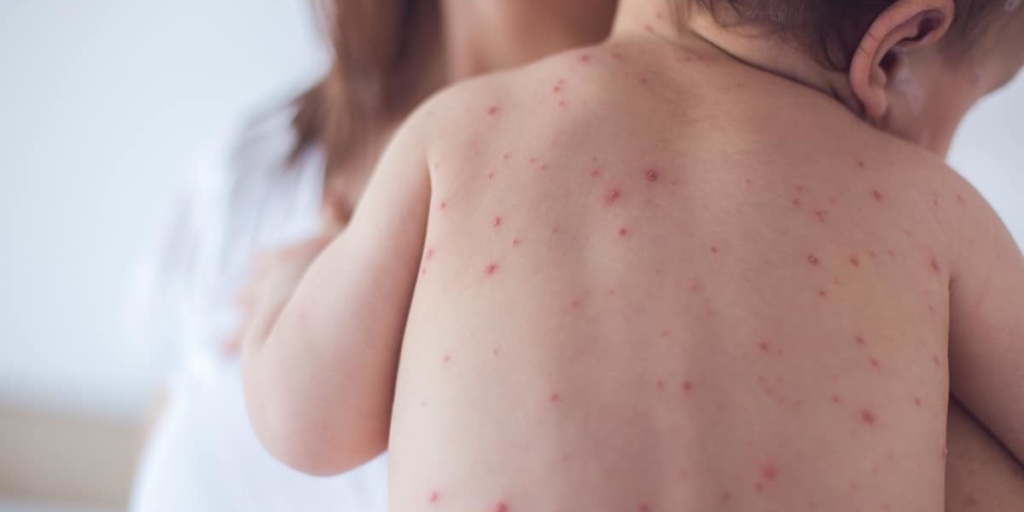 One of childhood’s least-enjoyed rites of passage is getting chickenpox. Indeed, it is so common that most estimates suggest that 95% of adults in the United States have had chickenpox at some point in their life. Even though the vaccine was approved by the FDA in 1995, there are still about four million cases a year. Fortunately most young children who get chickenpox have a mild case, but it’s still an unpleasant experience that needs relief.

Also known as varicella, chickenpox is a contagious viral infection that is caused by exposure to the varicella zoster virus (VZV). Chickenpox owes its familiar name to the dotted skin rash that can form all over the body when infected. These small, itchy blisters are the most well-known symptom of chickenpox, but getting the disease also often includes fever, headaches, and fatigue. In rare cases, complications from chickenpox can lead to pneumonia and encephalitis.

Chickenpox is by far more common in children than in adults or adolescents, though the introduction of the varicella vaccine has resulted in a marked reduction in cases and complications that lead to hospitalization. One of the reasons it’s more common in children is that most people become immune to it after a single chickenpox infection in childhood. The virus, however, remains dormant in the body throughout life, and it can become reactivated as a type of herpes virus that leads to shingles.

The varicella virus is airborne and highly contagious, and it can spread from person to person through coughs, sneezes, or any other way aerosolized particles can reach another person. Part of the reason it is so easily spread is that it is most contagious in the day or so before any itchy rash appears. This means that it can spread to a large group of children (such as a classroom) before a parent knows their child has it. It can then take up to several weeks for the infection to develop into chickenpox; once the rash appears, the blisters will scab over and begin to fall off after 5-10 days.

Signs and Symptoms of Chickenpox

The first signs of chickenpox can appear up to a couple days before the rash appears. These symptoms include fever (typically 101°-102°), headaches, loss of appetite, and fatigue or general malaise. These symptoms last a few days and tend to fade away once the familiar rash appears. The rash starts as a series of small, pimple-like bumps and then the bumps become fluid-filled blisters over the next several days. Eventually the blisters burst and result in open sores that crust over and become scabs.

Some people are inherently more at risk for chickenpox complications than others. Pregnant women, newborns born to mothers with chickenpox, leukemia patients, and people with weak immune systems are all more likely to have problems. One of the most common complications is a bacterial infection of the skin. After the chickenpox blisters burst, they leave open sores until a scab forms. During this time, anyone can potentially get a skin infection, but people with eczema or other skin conditions are at greater risk.

In patients with compromised immune systems, the varicella virus can spread through the blood to other parts of the body. One of the more common areas of infection is the respiratory system; the virus infects the lungs and can cause pneumonia, an inflammatory condition with symptoms like fever, coughing, chest pain, or difficulty breathing. Another complication related to infection is encephalitis, which is an inflammation of the brain. Serious complications can also include dehydration, sepsis, and problems with the nervous system.

Now that a chickenpox vaccine is available, it is the number one way to prevent your child from getting chickenpox. Doctors recommend that a child get an initial shot when they are 12-15 months old and then a booster at 4-6 years old. Any person 6 years of age or older who hasn’t had chickenpox and hasn’t been vaccinated can and should get two doses of the vaccine. For the vast majority of people, this will provide lifelong protection from the virus.

It is possible to still get chickenpox even if vaccinated, but it is very rare and typically results in a very mild version of the illness. For any infected person who develops symptoms, however, the treatment is the same. Antiviral medications may be used in some children who are at risk for complications, but most treatment involves managing the discomfort associated with the symptoms. Below are some tips and methods for helping your child feel better while they’re recovering from the infection:

One important note about pain relief: never give aspirin to a child with chickenpox. It can lead to a dangerous condition called Reye syndrome. Reye syndrome is a serious brain disease that can result in death or severe brain damage. 90% of cases of Reye syndrome in children are believed to have been caused by aspirin.

When to Call a Doctor

As noted, the vast majority of childhood cases of chickenpox are a mild (if unpleasant for the child) medical problem that will run its course within a couple weeks. There are some rare severe cases, however, when the symptoms and side effects are more intense, especially for high risk kids. If your child has any of the following signs, you should contact a doctor:

At TrustCare Kids, we know how precious your children are to you, and that’s why we are passionate about offering easily-accessible and high quality healthcare for them. If your child has been experiencing severe chickenpox symptoms, or has signs of complications, you can bring them in on a walk-in basis to our clinic for urgent care seven days a week for extended hours. Our dedicated staff will help your child get feeling better as quickly as possible!